CROSS THE LINES – Lessons On Resilience From The Marathon Grand Slam

You are here: Home1 / About us2 / Keynote Speakers3 / CROSS THE LINES – Lessons On Resilience From The Marathon Grand ... 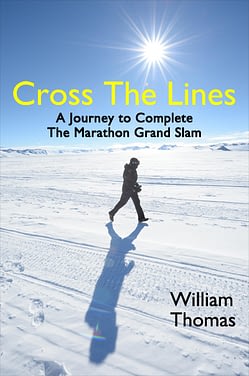 Dr. William Thomas only began running at age 42, and ran his first marathon nine months later. Looking for a new goal, he set out to complete The Marathon Grand Slam: running a marathon on all 7 continents and at the North Pole. In addition to races in the United States, his Grand Slam journey took him to Singapore, France, Brazil, South Africa, Australia, Antarctica, and, ultimately, to the North Pole.

Along the way he learned valuable lessons that helped him not only to run but also to maintain a healthy personal life, manage an exciting global career, and start his own business. CROSS THE LINES is the story of the multi-year journey that put him onto a new and very exciting path.

William talks with groups to share his adventures and the lessons he learned about dealing with change and overcoming obstacles, so that others can see what they are capable of. His goal is not just for people to leave with ideas for improving their job performance, but also to walk out feeling inspired to do something new, something they have thought about but have hesitated to try. Whether it is innovation in their job, a new hobby in their personal life, or even running a marathon themselves, the message is a simple one: it’s never too late to chase a dream, so get out there and do it!

The Marathon Grand Slam is one of the most exciting goals in the world of distance running. As of September 2019, 142 people worldwide have completed it. The path to completing The Grand Slam offers an opportunity to run not only in different countries but also in very different climates and terrains, going in William’s case from the streets of Singapore near the equator to a frozen glacier in Antarctica, before finally running on a 3-foot thick ice floe at the North Pole. The Grand Slam is, for many runners, a multi-year challenge that demands not only athletic skill but also the ability to balance extreme running with the rest of their day-today life, and the resilience to overcome challenges that emerge over time. During William’s pursuit of the Grand Slam he changed careers, moved around the world, and ultimately started a business, all while keeping an eye on the next race.

Dr. William Thomas is a retired US Air Force lieutenant colonel who has been working in Asia as a leadership advisor and coach since 2012. During his military career he served as a strategic planner, deployed to Iraq and Afghanistan, and taught as a professor of strategy and political science at the US Air Force Academy. He has also been a professor at Georgetown University in Washington DC, and taught as a Fulbright Scholar at Nanyang Technological University in Singapore. With 31 marathons done, he is also a “Six-Star Finisher,” having completed all six of the Abbott World Marathon Majors (New York, Tokyo, Chicago, London, Berlin, and Boston).

CROSS THE LINES: A Journey to Complete The Marathon Grand Slam, is available online at Amazon, iBooks, Book Depository, and Barnes & Noble. You can learn more on his Athlete page at http://www.facebook.com/DrWilliamThomas.

For those interested in this keynote, please complete this web form. We will be in touch with you shortly.

This site uses cookies. By continuing to browse the site, you are agreeing to our use of cookies.

We may request cookies to be set on your device. We use cookies to let us know when you visit our websites, how you interact with us, to enrich your user experience, and to customize your relationship with our website.

Click on the different category headings to find out more. You can also change some of your preferences. Note that blocking some types of cookies may impact your experience on our websites and the services we are able to offer.

These cookies are strictly necessary to provide you with services available through our website and to use some of its features.

Because these cookies are strictly necessary to deliver the website, refuseing them will have impact how our site functions. You always can block or delete cookies by changing your browser settings and force blocking all cookies on this website. But this will always prompt you to accept/refuse cookies when revisiting our site.

We fully respect if you want to refuse cookies but to avoid asking you again and again kindly allow us to store a cookie for that. You are free to opt out any time or opt in for other cookies to get a better experience. If you refuse cookies we will remove all set cookies in our domain.

We provide you with a list of stored cookies on your computer in our domain so you can check what we stored. Due to security reasons we are not able to show or modify cookies from other domains. You can check these in your browser security settings.

We also use different external services like Google Webfonts, Google Maps, and external Video providers. Since these providers may collect personal data like your IP address we allow you to block them here. Please be aware that this might heavily reduce the functionality and appearance of our site. Changes will take effect once you reload the page.