Archive for category: Coaching and Mentoring

You are here: Home1 / Blog2 / Coaching and Mentoring 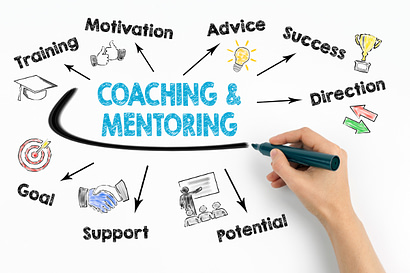 I am hot, have twisted my ankle and scuffed my knee. I also have a big smile on my face having just returned with my son and daughter from a morning of sport. The first was their tennis lesson the second a football game (Soccer to those who need clarity!)

Their tennis coach, let’s call him Keith, has a way with the kids which I felt worked superbly.

Sounds very much like a workplace coach for me and it was interesting for me to observe his easy style and how he enabled my kids to learn, without always giving them the answers.

Fast forward 1 hour. A drinks break and a warm-down on the football square, with me involved. They are happy, talking about their lesson and now enjoying another of their passions – Football (Australian and US readers be assured I mean soccer!).

After a few minutes two boys come over and ask if they can play. Now we have enough for a game! We start passing the ball around and one of lads who has joined us seems to be a magician with the ball. Within a few minutes he tells us he plays for AC Milan boys and goes to Italy for football camps in the holidays. We’ll call him Fabio. The competitors in my son and I came out and we tried to emulate the silky skills that were on display in the AC Milan half of the pitch. Oh dear. I thought I could do this once! Here is where I observed my son change his approach and respond totally differently to the tennis lesson I just observed.

He really looked up to Fabio and started to talk about how he was trying to do certain tricks. I had been helping as a coach – but clearly I wasn’t that competent myself! He observed Fabio and started to practice and do more. Fabio gave one or two tips, without showing my son directly and I could see the dynamic between them changing.

We decided to have a game. Their team went 3-0 up and we were all over the place. My son, who had been observing their playing style, suggested we emulate it. Pass, run to space, pass, stay close for tackles, watch the ball. I was now on the back foot. My son was in charge. We started winning tackles, we passed, we ran, I fell a few times but didn’t want to let down my kids – especially my son who had taken control. Then…we scored! My son found the bottom left hand corner and as I came in for the high five he wheeled round and high fived Fabio and talked about how he did it! Eh?? He was on our team!  Then he came back and got us into our positions and we ended up narrowly losing 7-5.

To me I reflected and realised the subtle differences here between the tennis coaching and what I viewed as football mentoring here. In two ways. My son certainly looked up to Fabio as a mentor and I can tell you he has just gone out with the ball to practice, inspired by the experience. The fact he wanted to be congratulated for a goal my Fabio first is a great indicator I felt. The second mentoring was “up the line”!  I was the mentee and my son the mentor. I upped my game and looked up to him and he showed me way more about the game that winning or losing. I am really proud and quite by accident realised I had one of the best mentoring sessions I’d had in years…

This site uses cookies. By continuing to browse the site, you are agreeing to our use of cookies.

We may request cookies to be set on your device. We use cookies to let us know when you visit our websites, how you interact with us, to enrich your user experience, and to customize your relationship with our website.

Click on the different category headings to find out more. You can also change some of your preferences. Note that blocking some types of cookies may impact your experience on our websites and the services we are able to offer.

These cookies are strictly necessary to provide you with services available through our website and to use some of its features.

Because these cookies are strictly necessary to deliver the website, refusing them will have impact how our site functions. You always can block or delete cookies by changing your browser settings and force blocking all cookies on this website. But this will always prompt you to accept/refuse cookies when revisiting our site.

We fully respect if you want to refuse cookies but to avoid asking you again and again kindly allow us to store a cookie for that. You are free to opt out any time or opt in for other cookies to get a better experience. If you refuse cookies we will remove all set cookies in our domain.

We provide you with a list of stored cookies on your computer in our domain so you can check what we stored. Due to security reasons we are not able to show or modify cookies from other domains. You can check these in your browser security settings.

We also use different external services like Google Webfonts, Google Maps, and external Video providers. Since these providers may collect personal data like your IP address we allow you to block them here. Please be aware that this might heavily reduce the functionality and appearance of our site. Changes will take effect once you reload the page.